In many ways a typical gentleman’s library, the Hartley Collection reflects Henry Robinson Hartley’s interests in travel, the classics and natural history. Reluctant to travel himself, Hartley acquired books to “fill out his ideas” of different parts of the world, collecting descriptions of world voyages, of journeys to Africa and Arabia, Lapland and Russia, as well as reports of tours through Europe.

His lifelong interest in classical literature makes this one of the largest sections of the collection whilst the Arabic, Hebrew and Turkish grammars and dictionaries demonstrate his wider interest in languages.

Extent: Over 500 books ranging in date from the 17th century to the early 19th century.

The Hartley Collection is part of Special Collections on level 4 of the Hartley Library and items are fetched for use in the Archives, Manuscripts and Rare Books Search Room.

The books are listed by author in the Card Catalogue which is in the Film and Music Resources Room on level 5 of the Hartley Library.

There are records for a small proportion of the collection on WebCat, the online catalogue.

Henry Robinson Hartley (1777-1850) bequeathed almost all of his estate to the Corporation of Southampton, intending that it should be used to 'promote the study and advancement of the sciences of natural history, astronomy, antiquities, classical and oriental literature in the town, such as by forming a public library, botanic gardens, observatory'. It was also his wish that his three houses in the High Street should be maintained and his effects, in particular his manuscripts, preserved.

In 1862, the Hartley Institution, the forerunner of the University of Southampton, opened on the site of Hartley's property. In the period since his death, his manuscripts had been destroyed by his trustees, who regarded his revolutionary and atheistical ideas as 'obscene and blasphemous', but his personal library survived, becoming the first of the new library's special collections.

Bookplate of the Hartley Bequest 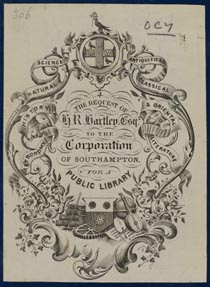 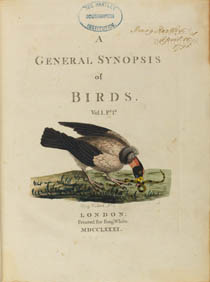