The pamphlets on slavery include publications both for and against abolition, with examples from the eighteenth century including Thomas Clarkson An Essay on the Comparative Efficiency of Regulation or Abolition as Applied to the Slave-Trade (1789) and The Slave-Trade Indispensable in Answer to the Speech of William Wilberforce ... 13 May 1789 (1790).

The period of 1820-1830s is especially well represented, with pamphlets on the question of abolition versus voluntary manumission and on the positions adopted both by the British Government and the Jamaican House of Assembly. There are also publications of regional groups, including an album compiled by the Female Society for Birmingham ...  for the Relief of British Negro Slaves which contains its own reports and various tracts on slavery including extracts from the Royal Jamaica Gazette.

Accounts of travels and voyages to the West Indies are also included, as are descriptions of the lives of the British colonists.

Extent: Over 220 books and pamphlets on the West Indies and the abolition of slavery, dating from the 18th and 19th centuries.

The Oates Collection (Slavery) is part of Special Collections on level 4 of the Hartley Library and items are fetched for use in the Archives, Manuscripts and Rare Books Search Room.

Library Search includes records for all Oates Collection books and journals. It enables you to search the Library's printed books, journals and electronic resources at the same time. Access to e-resources is limited to staff and students of the University.

Robert Washington Oates (1874-1958) was born in London and educated in Belgium and Germany. He served in the First World War as a private soldier, at the same time amassing a considerable fortune through his financial interest in a firm of industrial chemists. After the war he became an antique dealer, gaining an international reputation in the antiquarian book-trade.

In 1954 Oates was instrumental in securing Gilbert White's home, The Wakes, as a permanent memorial to the naturalist and author. There he also established the Oates Memorial Museum and Library, which commemorated two members of his own family, his cousin, Captain Lawrence Oates (1880-1912), a member of the Scott's Antarctic Expedition and his uncle, Frank Oates (1840-1875) who was one of the first Europeans to see the Victoria Falls. At that time, the Library was reported to amount to 40,000 books.

Two collections of books from the Oates Memorial Library were acquired by the University in 1970.

From: Album of the Female Society of Birmingham ... for the Relief of British Negro Slaves 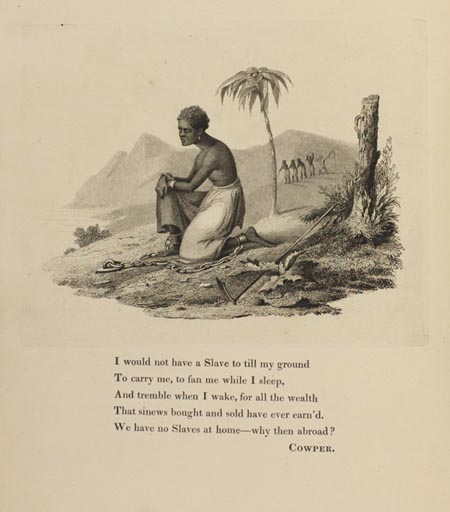