Guide to the National Oceanographic Library

The National Oceanographic Library holds a unique collection within its archives and special collections.

We have a digital archive which is available to view.

Past examination papers are available from this online database.

Use this form to suggest items to purchase for the National Oceanographic Library collections.

When you enter the details of the item that you want on the catalogue it will display a call number or code that tells you where the item is shelved.

The call number will usually look something like these examples:

Although the codes look different, they work in much the same way: the combinations of letters and numbers gives a location based on the subject content of the item. The items are arranged on the shelves using the call numbers.

The library floor plan will show you where items with particular call numbers are stored.

The National Oceanographic Library was given its title in the 1980s in recognition of its importance as a significant collection of marine resources in the UK. Its value as a national library continued to be maintained and the management structure was put in place working within in the University Library when it transferred to the Southampton Oceanography Centre in 1995. As part of the establishment of the Library in the new location, the collection expanded to include not only marine science with collections from the Department of Oceanography but also, marine geophysics resources from the Physics Department and geology resources from the Geology Department. 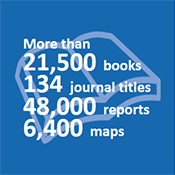 Borrowing books from the Library

Find out more about borrowing books from our library guide.

The National Oceanographic Library holds print copies of all the Ocean and Earth Science, University of Southampton doctoral level theses in our archives; these are listed on the library catalogue - WebCat and many of these are now also available online from ePrints Soton Please ask staff at the Help Desk if you need to see a printed copy of a thesis.

Can't Find What You're Looking For?